What the hell did I just make? Volume 1, Number 1.

I am not one for following recipes, for the most part.  There are times when I may crack open a cookbook for something specific, but by and large my cooking is almost pure improvisation.  Usually what it amounts to is looking in the fridge and in the pantry and saying "hmmm...6 totally unrelated items that are past their expiration date...what would they all taste like together?"

Now this may SOUND kind of appalling, but for the most part what comes out of this process tends to taste OK, and has not killed any of the brave souls who have ever sampled my creations.

I have decided to add some of my more successful creations to this here blog...just for the hell of it.  There may be other vegetarian cooks who could play around with some of these ideas and not die in an ER somewhere.

Also, it may be fun for people who read these recipes (especially the more exotic ones) to have a go at telling me that what I came up with purely at random actually closely resembles a real dish made by real chefs.


So this is my first documentation of something I have been doing since I was 8 years old (when my drunk single parent decided I was old enough to feed myself).

This is vaguely like an Indian dish (as I love Indian food with a passion)...but WHAT Indian dish is beyond me: 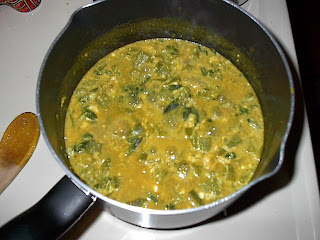 And here are the ingredients:

I blended all the spices with the water and oil, boiled it for a couple minutes, turned it to medium and added the okra and lamb's quarters (I had boiled and frozen them prior, so I just need to thaw them in the liquid).

Once the veggies were thawed, I decided to add the milk and the paneer...and just for the hell of it I scrambled an egg and spread it throughout the mixture, like one would with egg drop soup.

This I let simmer covered for a few minutes and then let it sit until it was eating temperature.

The results?  Holy crap, it was tasty!  I wish I had made a lot more of it.  It's very nice served on top of a slice of naan (also homemade).

So what the hell did I just make?
Posted by John Ludi at 1:25 PM